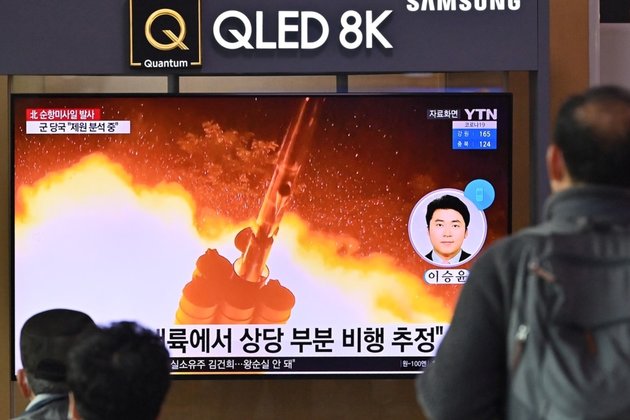 South Korea's military said the North launched what were presumed to be two short-range ballistic missiles toward the sea off its east coast around 8 a.m. local time.

It said the missiles were launched from the area near Hamhung, a city on North Korea's east coast, and traveled about 190 kilometers at an altitude of 20 kilometers.

So far this month, North Korea has conducted six rounds of tests, firing at least 10 missiles into the sea. According to analysts, that is the most North Korean missile launches in a single month, if cruise missiles are included in the count.

North Korea's missile frenzy appears at least partly aimed at pressuring the United States and South Korea, which have called for the North to return to nuclear talks.

Mark Lambert, U.S. deputy assistant secretary of state for Japan and Korea, said Wednesday the United States will 'go anywhere' and 'talk about anything' with North Korea.

'We have to have a serious discussion about the denuclearization of North Korea, and if North Korea is willing to do that, all sorts of promising things can happen,' Lambert said at an online event hosted by the Center for Strategic and International Studies.

North Korea has refused to engage in talks, saying the United States should first make military and economic concessions.

North Korea has several other possible motivations for testing missiles, including shoring up domestic political support for leader Kim Jong Un, ensuring the performance of new weapons and demonstrating deterrence.

'Some observers have suggested that the Kim regime's frequent launches are a cry for attention, but Pyongyang is running hard in what it perceives as an arms race with Seoul,' said Leif-Eric Easley, associate professor of international studies at Ewha Womans University in Seoul.

'The Kim regime is developing an impressive diversity of offensive weapons despite limited resources and serious economic challenges,' Easley said. 'Certain North Korean tests aim to develop new capabilities, especially for evading missile defenses. Other launches are intended to demonstrate the readiness and versatility of missile forces that North Korea has already deployed.'

The U.S. State Department on Wednesday condemned the launches, saying they violate multiple United Nations Security Council resolutions and pose a threat to North Korea's neighbors and the international community.

The North's latest test comes after U.S. President Joe Biden's administration reportedly decided on a new ambassador to South Korea. According to several media reports, Philip Goldberg, a career ambassador now serving as U.S. ambassador to Colombia, has been chosen for the position.

The White House has not formally announced the move.

South Korean media reports have focused on Goldberg's experience from 2009-10 as coordinator for the implementation of United Nations sanctions on North Korea.

The U.S. earlier this month tightened sanctions against Pyongyang, imposing them on five North Koreans it alleged were helping procure supplies for North Korea's weapons program.