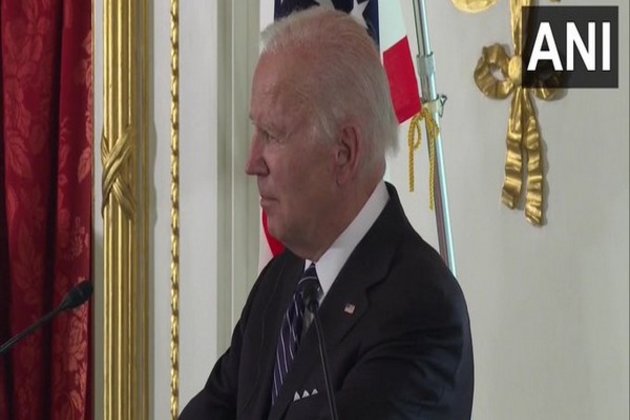 Tokyo [Japan], May 23 (ANI): US President Joe Biden said on Monday that Washington is ready to get involved militarily to defend Taiwan in the event of invasion.

Biden met with Prime Minister Kishida Fumio of Japan on Monday to advance cooperation on a range of bilateral, regional, and global issues.

During a joint press conference with the Japanese PM, Biden reaffirmed Washington's commitment to ensuring the security of the Taiwan Strait and preventing any change in the status quo unilaterally.

When asked whether the US is ready to get involved militarily to defend Taiwan, he replied in the affirmative, adding that this is the commitment that the US has taken on.

"We remain committed to supporting peace and stability in Taiwan Strait. The US stands firmly with Japan and other nations not to let that happen (China taking over Taiwan)," he said.

"After this, US and Japan together with 11 other nations will be launching the Indo-Pacific economic framework. This framework is a commitment to working with our close friends and partners in the region and challenges that matter most to ensuring economic competitiveness," he added.

According to the White House statement, Biden commended Prime Minister Kishida's leadership in responding to Russia's war against Ukraine, and his determination to strengthen Japan's defence capabilities, noting that a strong U.S.-Japan alliance is the cornerstone of peace and stability in the Indo-Pacific region.

They agreed to deepen cooperation in areas such as emerging technologies, supply chain security, and clean energy.

Addressing a press conference, the Japanese PM said the two leaders discussed the impact of the Ukraine situation on the Indo-Pacific. "For China, we concurred to monitor recent activities of Chinese Navy and joint military exercise of China and strongly oppose the changes caused by force."Ahead of the Quad summit on Tuesday, Chinese Foreign Minister Wang Yi slammed the United States' Indo-Pacific strategy on Sunday, charging that the four-nation grouping was formed in the guise of freedom and openness but with the purpose to contain China.

He made these comments while addressing a press conference after talks with visiting Pakistani Foreign Minister Bilawal Bhutto Zardari in Guangzhou, Xinhua news agency reported.