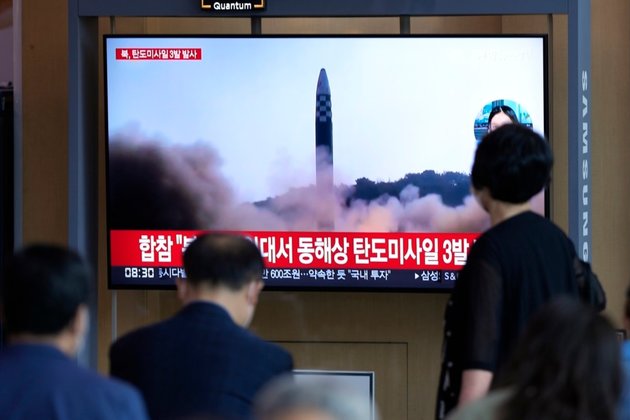 U.S. officials had repeatedly warned that North Korea could conduct a long-range missile launch, or even a nuclear test, during or around Biden's Asia trip.

While North Korea refrained from any tests during Biden's visit, it launched its latest flurry of missiles about 12 hours after he left Japan.

In an alert to reporters, South Korea's military said North Korea launched three ballistic missiles from the Sunan area of Pyongyang toward the sea off its eastern coast.

The reason for the discrepancy between the number of missiles reported by Japan and South Korea was not immediately clear.

The range of the missiles was also not yet known.

Shortly after Biden landed in the Washington area, he was briefed on the North Korean launches, U.S. officials said.

In a statement, the U.S. military said that the launches did not pose 'an immediate threat to U.S. personnel or territory, or to our allies,' but that the event 'highlights the destabilizing impact' of North Korean weapons.

North Korea has conducted 17 rounds of launches this year. In March, it tested an intercontinental ballistic missile, its first such test in nearly five years.

The nuclear-armed North regularly came up during Biden's discussions in South Korea and Japan.

US President Joe Biden speaks during a news conference with South Korean President Yoon Suk Yeol at the People's House, May 21, 2022, in Seoul.

In Seoul, Biden and South Korea's new president, Yoon Suk Yeol, indicated they could soon intensify joint military exercises that had been scaled back since 2018.

In Tokyo, Biden met with the families of Japanese citizens who were kidnapped by North Korean agents decades ago.

At a Tuesday meeting of the Quad - a regional grouping of democracies that includes the United States, Australia, Japan and India - Biden and his counterparts condemned North Korea's 'destabilizing ballistic missile development and launches.'

North Korea walked away from nuclear talks with the U.S. in 2019, the same year it resumed ballistic missile tests. Under Biden, the U.S. has repeatedly said it is willing to reenter talks without preconditions.

Biden said in Seoul, however, that he would only meet North Korean leader Kim Jong Un if Kim was 'sincere' and 'serious' about moving the talks forward.

When asked in Seoul whether he had a message for Kim, Biden replied: 'Hello. Period.'

Kim has not publicly responded to Biden's greetings. In the past, North Korean officials suggested they would not reenter talks while the United States undertook a 'hostile policy' toward the North.

U.S. officials traveling with Biden suggested that North Korea's coronavirus outbreak was one possible reason Pyongyang had not engaged in negotiations.

North Korea had not acknowledged any coronavirus cases until this month, when it reported an explosion of suspected infections. Since May 13, North Korean state media have reported over 3 million suspected cases.

The outbreak has not prevented North Korea from conducting missile tests. Since it acknowledged the COVID-19 cases, North Korea has fired at least six ballistic missiles.

The North has multiple possible motives for testing weapons, including pressuring the U.S., shoring up domestic political support for leader Kim, ensuring the performance of new weapons and demonstrating deterrence.