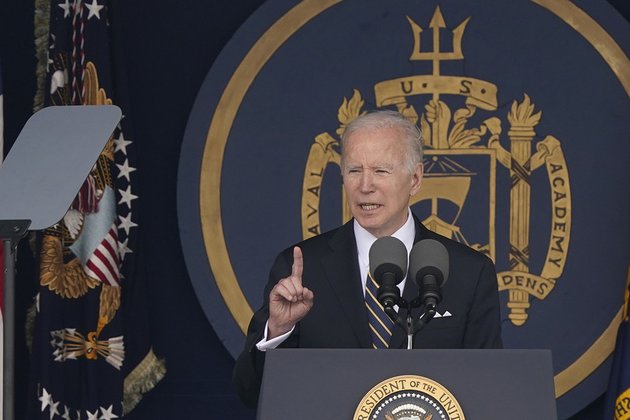 US President Joe Biden added to his list of gaffes on Friday by apparently confusing the two Korean states.

Speaking at the Naval Academy's graduation ceremony in Annapolis, Maryland, Biden discussed the importance of US cooperation with allies for the sake of global security. As an example of such cooperation, he mentioned the sanctions imposed by Western countries on Moscow over its military operation in Ukraine.

"Did anyone think that when I called for sanctions against Russia, in addition to NATO, that Australia, Japan, North Korea, some of the ASEAN [Association of Southeast Asian Nations] countries would stand up and support those sanctions?" the US leader asked.

However, North Korea, itself heavily sanctioned by Washington, was actually one of five countries to vote in early March against a UN resolution condemning the Russian military offensive in Ukraine.

Pyongyang even accused the "hegemonic policy" of the US of fueling the conflict.

On Thursday, meanwhile, Russia and China used their vetoes to block a US-drafted UN Security Council resolution aimed at strengthening international sanctions on North Korea. The countries had not vetoed any of the previous North Korea sanctions packages implemented since 2006.

Last month, Biden was mocked online for being whisked away by a person in a bunny suit while talking to a reporter. On another occasion, during a visit to North Carolina, Biden extended his hand at the end of a speech in a manner that some observers described as "shaking hands with thin air." 'Fact-checking' website PolitiFact, however, argued that Biden was merely "gesturing towards the audience."