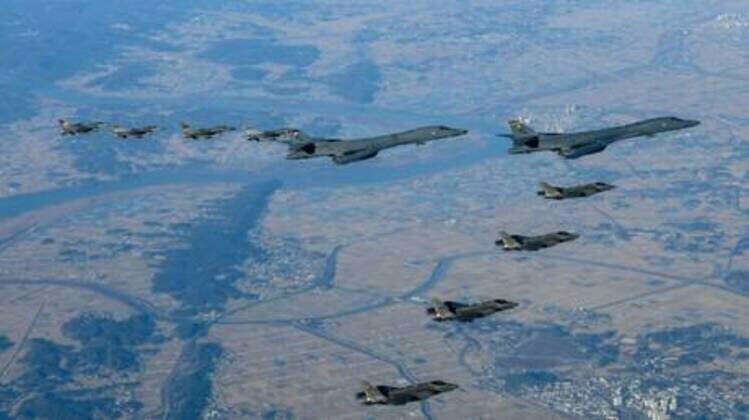 A US B-1B Lancer long-range strategic bomber has been redeployed to the Korean Peninsula to take part in a joint US-South Korean drill, Seoul's military said on Saturday, as quoted by local media. The announcement came a day after North Korea conducted its latest intercontinental ballistic missile (ICBM) test.

"South Korea and the US conducted a joint air drill today with the US Air Force's B-1B strategic bomber redeployed on the Korean Peninsula," the South's Joint Chiefs of Staff (JCS) said in a statement.

The military stated that the US supersonic bomber flew over the South's air defense identification zone and was escorted by South Korean F-35A jets and American F-16 fighters.

"Through this drill, we have once again demonstrated the joint military capacity of the South Korea-US alliance and Washington's commitment to protecting the Korean Peninsula and providing extended deterrence," the JCS said.

Earlier this month, Yonhap news agency reported that Washington would redeploy B-1B bombers to South Korea for the first time since 2017. The move, according to the outlet, followed Seoul's request for the US to step up deployment of "strategic assets" to the peninsula amid a record number of missile launches by the North this year.

On Friday, the militaries of the two states conducted air drills over the East Sea in response to what the JCS called "North Korea's ICBM provocation."

North Korean leader Kim Jong-un said his country's latest ICBM test would reaffirm the DPRK's government's "strong will" to retaliate for its enemies' "madness of aggression and war exercises that are trying to destroy the peace and stability of the Korean Peninsula." The test came less than 24 hours after a short-range ballistic missile launch by the North.

Pyongyang has repeatedly condemned South Korea and its allies' military drills, calling them preparation for an invasion, and insists its missile launches are a legitimate response to "provocations" from the US and its partners in the region. Washington has likewise called North Korea's actions provocative and demanded it cease all weapons tests.